Lucite is a form of acrylic plastic known chemically as polymethyl methacrylate. It has both the light weight of plastic and the hardness and sheen of glass.

Lucite was born in 1930s America as a direct consequence of the Great Depression. Two rival chemical companies, DuPont and Rohm & Haas, had spent the early part of that decade working on glass-like acrylic resins. Rohm & Haas launched a version in 1935 that they advertised to be nearly unbreakable Plexiglass; DuPont followed in 1937 with its own version.

As war broke out across the world both companies were enlisted by the military to create periscopes, windshields, gunner turrets, cockpits and the noses of bomber planes. Seeing its practical application and versatility, DuPont decided to license the material to a wider audience, including several costume jewellery makers. This proved to be a very lucrative move: the condition of the economy and high fine jewellery prices saw women embrace plastic jewellery with boundless enthusiasm and excitement.

The first company to make lucite jewellery was Trifari, an American brand with Italian roots. They began to replicate rock crystal and other gemstones by creating life-like lucite gemstones in all sorts of shapes and sizes. Their most famous lucite pieces were a series of animal brooches in the 1940s – known as the ‘jelly bellies’ – where lucite cabochons created the abdomen of the animal in question. A whimsical menagerie of Jelly Belly animals were created to much success and popularity. They included elephants, chicks, roosters, poodles and even fish. Many rumoured that Trifari had recycled the Jelly Belly lucite from World War II fighter jet windshields. Archival texts claim that Trifari’s founder was inspired by seeing a pile of discarded lucite at a military air force base, however this has never been proven as fact.

As the 1940s and 50s rolled on lucite became increasingly popular in the world of jewellery. Less expensive to produce than Bakelite, and more chemically stable than celluloid (another earlier iteration of plastic), this innovative invention began to permeate into both high and low society as the material to be wearing. This was particularly true of the 1950s which embraced Modernism, and with it all things new. Brightly coloured lucite rings, bangles, necklace chains, beads and earrings dominated the market. Experimentations had allowed lucite to now be created in a variety of rainbow colours and textures, from the crystal clear to the opaque and milky. It could also be set with tiny flowers, shells and other miniature ornaments, or carved to replicate intricate patterns, shapes and forms. Hard-wearing, waterproof and easy to wear, it also became the go-to solution for synthetic gemstones such as moonstone and chalcedony. Many jewellery brands also ‘set’ tiny

In the early ’60s, the concept of disposable culture became something to celebrate, as seen in the the rise of pop art. Mass-produced plastic jewellery with a more futuristic, geometric feel was all the rage among the trendy, with many haute couture designers like Cardin and Courèges creating dresses and accessories from of lucite and Perspex, another acrylic. “Architec-jewels” made of lucite in bold black-and-white, op-art styles were sold as high fashion.

A decade later, by the start of the 1970s, this style of costume “junk” jewellery started to fall out of favour. The rhetoric around jewellery purchasing shifted its focus to heirloom jewellery and investment pieces, neither of which plastic was believed to have a place. Lucite’s utilisation in other commercial spheres, such homeware and fashion, further emphasised its position in the minds of the people as something non-precious as temporary.

Although lucite did resurrect itself in the 1980s, when garish, artificial-looking, neon-coloured pieces came into fashion, it never recovered to the heights it enjoyed in the 30s, 40s and 50s. 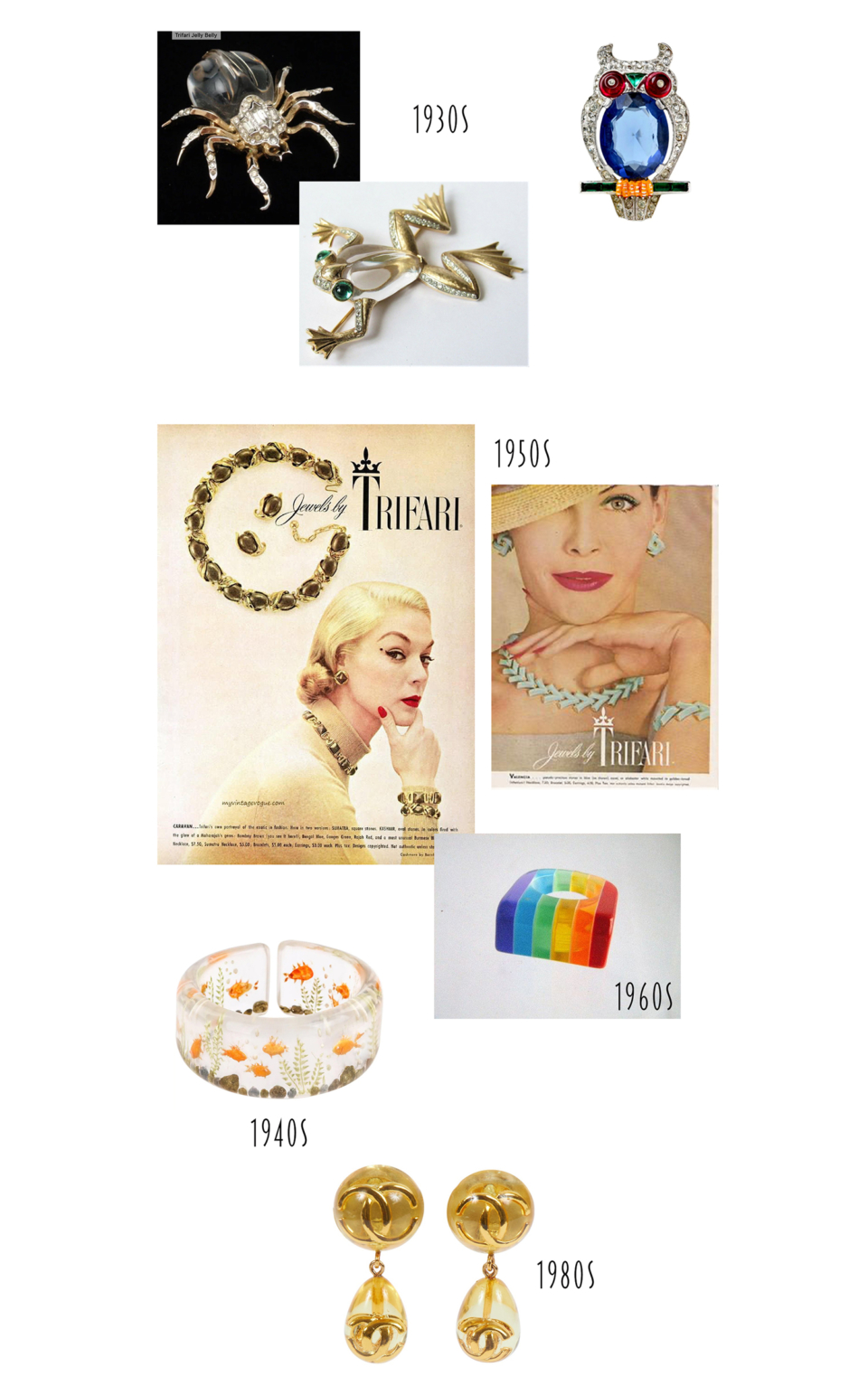